"We live in a modern (20-year old) house right next to a lake in Cambridgeshire, south-facing and with a balcony over the water. Because of its location (on an old brick pit), the house is constructed on pilings which were faced (between the waterline and the base of the balcony) with corrugated galvanised sheeting. Over the years, this sheeting had started to rust at the waterline and to fall away. What was needed was a replacement facing material and a method of attaching it. Also, most importantly, we needed to devise a way of working on (or in) the water to do the job, as that was the only access. Worse, the height from the waterline to the balcony gave a headroom of less than four feet.

Various methods were discussed, but none seemed practical. One suggestion was to build a dam around the base of the balcony and to pump out the water within it, but this sounded overly-complex, not to say expensive. After all, we weren’t rebuilding Southend pier. Eventually a local craftsman reckoned he could carry out the work using a wooden platform sunk in the water and wearing a pair of waders. Meanwhile, our friendly local surveyor designed a framework (40mm box section galvanised steel) and researched a suitable facing material. This would ideally be self-coloured, long-lasting (we don’t want to have to do this again for another 20 years), and capable of withstanding considerable extremes of temperature while being partly but permanently immersed in water.

Several materials were investigated and all but one eventually rejected. The final choice came down to the recycled plastic flexible edging planks offered by Filcris at Bourn. The company’s Phil and Chris (of Filcris!) gave good technical support, answered questions and supplied samples of the material before we got to the point of ordering. These planks were available from stock in suitable widths, lengths and colours (we used a dark brown) and at a reasonable price. Plans were drawn up and a suitable quantity of planking was ordered (and delivered promptly), allowing work to start in May. The planks were cut to length, mounted vertically on the galvanised frame with a 10mm gap between planks, drilled with oversized holes (7mm for a 4mm bolt, to allow for expansion) and fitted with self-tapping bolts and large washers, with the bottom edge of each plank well below the summer waterline.

The work was completed in ten days and the resulting structure is solid and pleasing to the eye. Also, we hope, low maintenance. Better, the chap doing the work only fell in once. The one problem is that we cannot, either from the house or the garden, see much of the result, but our neighbours across the water are most complimentary about the visual aspect." 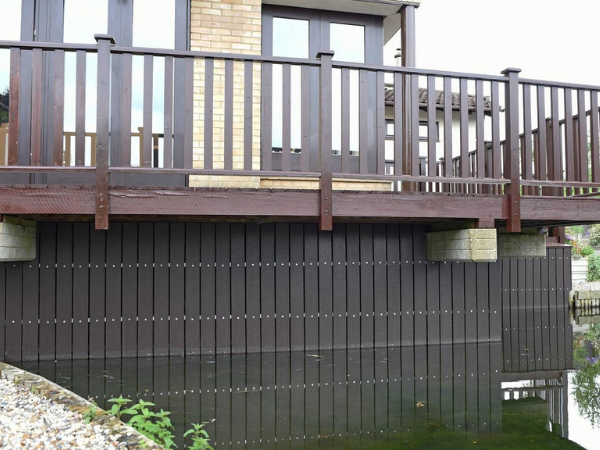 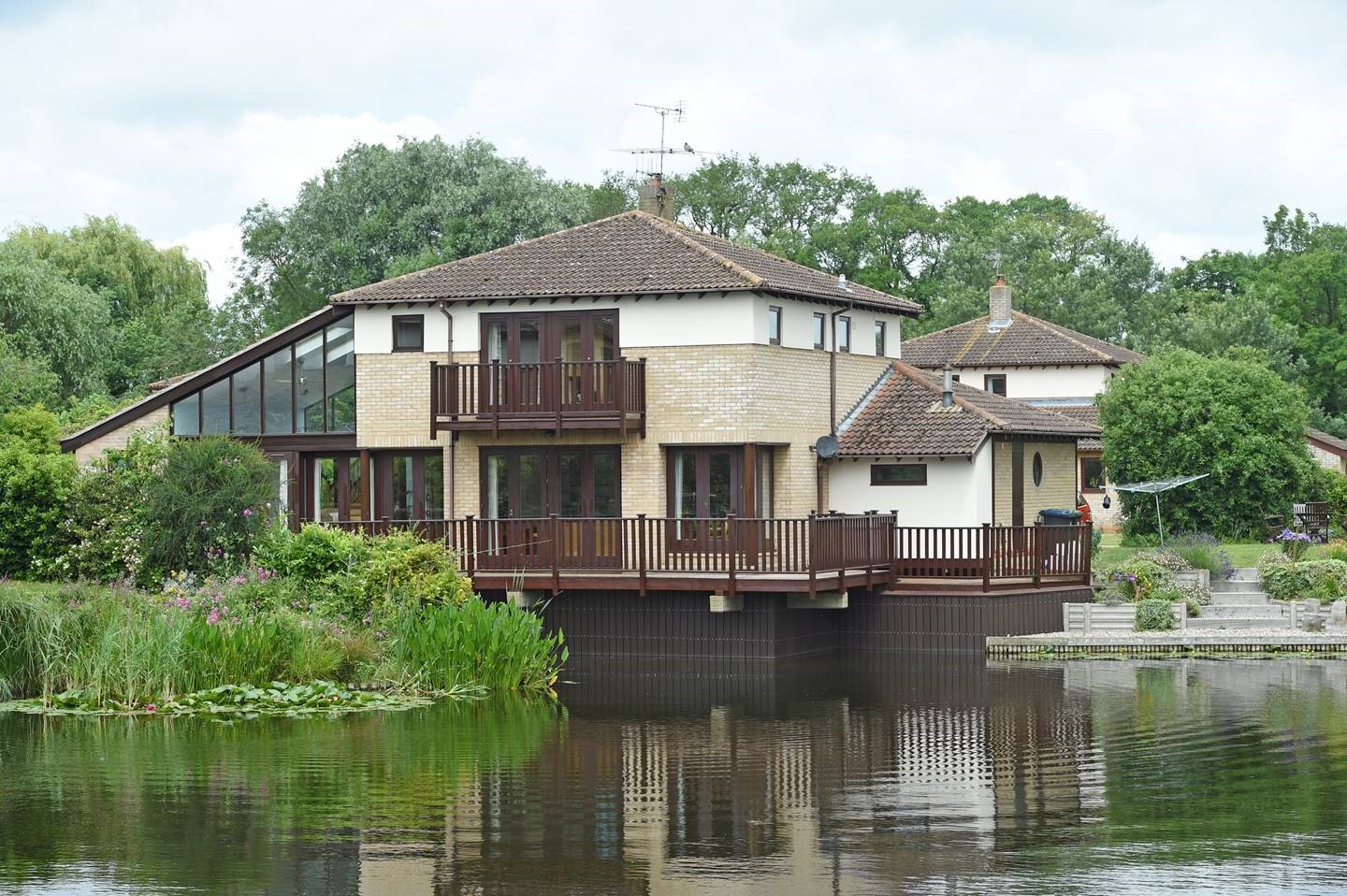 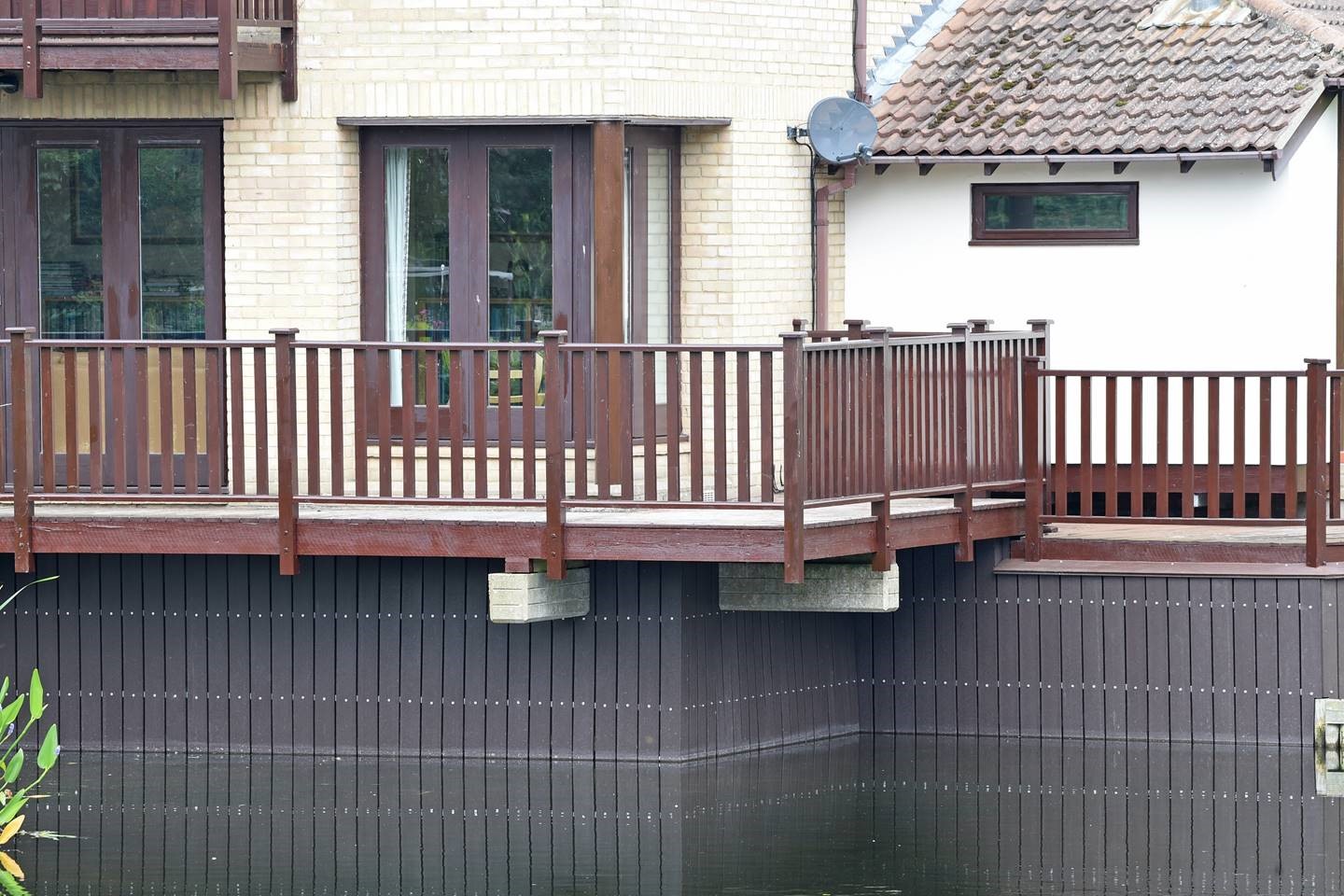